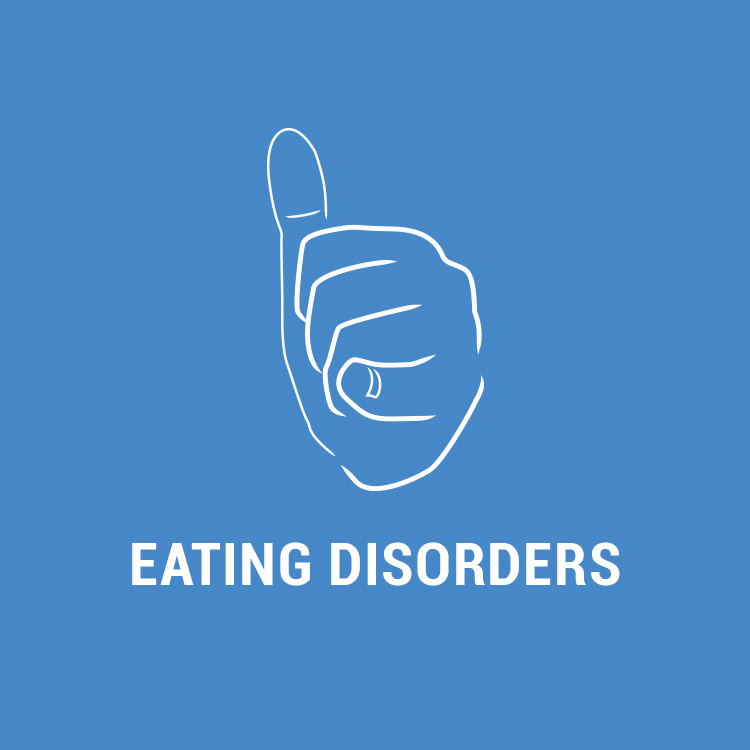 This Eating Disorders profile was created by combining stories of life experiences, lived by a number of individuals who have battled these condition. We hope you or your loved one find peace in identifying with any/all of these symptoms, because it will show you that you are far from alone. In fact, after reading these profiles, feel free to check out these stories of everyday #SameHere Heroes, as well as Celebrities, all of whom have faced their own mental health hurdles, showing that life challenges do not discriminate.

Some Common Symptoms: Two of the most common forms of eating disorders are anorexia and bulimia – there are many similarities but also so medifferences; with anorexia thoughts about food and weight take over a person’s life to the point where other aspects become less important or difficult to pay attention to, they’ll go out of their way to stop eating to the point of starvation while also exercising obsessively all in an effort to lose weight, they often start to shy away from social interaction and even seem to lack any emotion towards anything outside of their focus on food and weight, this can cause many other physical symptoms beyond the weight loss including loss of menstruation, stomach issues/pain and constipation, dehydration and even irregular heartbeat; with bulimia many of the same preoccupations with food consuming their life are present as are many of the physical symptoms, but unlike in anorexia those with bulimia will binge eat large amounts of food for short periods of time and then feel guilty and try to purge the what they’ve consumed through forced vomiting – often you can actually “see” the difference between those who are anorexic vs. bulimic as those with anorexia will experience massive weight loss, while those with bulimia will remain the same weight they have traditionally been or in some cases even gain weight.

Kayla grew up in an affluent suburb in Central New Jersey. For as long as she can remember, Kayla felt like a puzzle piece that didn’t quite fit. She had many friends and was considered a Type-A personality, but she noticed her mind seemed to run a bit deeper than her peers, which often found her unable to fully connect with them on the deep level she desired. Her wings were metaphorically clipped daily by her father who had come back from military service with PTSD and depression, neither of which he considered serious enough to seek out treatment. His words were his weapon and he exacerbated the anxiety and fear that seemed rooted within Kayla’s DNA, with most of his passing comments. Kayla’s mother, a former teen beauty pageant queen, was very loving and often comforted her when her father’s words brought out visible signs of her pain.

When Kayla was eleven, her parents picked her brother and her up from sleepaway camp and informed them without room for discussion, that they were not going “home” and instead were literally moving to Florida, that day. Their bags had already been packed for them. This was the catalyst that really kicked things related to Kayla’s anxious feelings and thoughts into high gear. She became phobic about very random things that were different in Florida, like the constant rain showers and thunder storms, and was prone to tantrums about how unhappy she was in her new environment.

It was later in high school that a number of elements converged and a new and dangerous behavior arose. Kayla was never happy with how she looked. Her father would tease her (in what he would consider in a “playful way” about her “thunder thighs”). Although her mother was loving and comforting, Kayla always envied her figure, which seemed to come almost effortlessly to her. Because she couldn’t control her father’s comments or how she felt relative to her mother on a daily basis, she felt the one thing she could control was the type and amount of food she ate. She cut down considerably on meals, often opting for an apple or handful of grapes for many of her meals. She even upped her efforts at the gym, walking on an incline on the treadmill for almost an hour a day, vs. the traditional 30 minutes of light jogging that had been her routine. The increased gym time caused her to withdraw from friends. She explained her lack of sociability by telling others she was “out working hard.”

After a few months she was noticing major differences in how her clothes were fitting her. While her dad still teased her, it was rarely about her figure. People in her life began to praise her consistently, which fueled this eating disorder, anorexia, even further. This became her new norm and as she grew up and went off to college she decided it felt good to have others comment on her figure in a positive way. The scary part was, strange symptoms she was at the mercy of, started to affect her day-to-day life. She would get extremely lightheaded upon standing up from her seat in class lectures, and even ceased menstruating. Her weight plummeted to 87 pounds and her parents finally took notice during a semester break, when she returned home to visit. She actually fainted from what the Emergency Room nurses noticed was incredibly low blood pressure. This was a wake-up call, but what was she to do now? Prior to these symptoms, she was able wear baggy clothing so as not to be noticed by others. At the hospital, she was set up with a nutritionist, and was given a weekly meal plan to follow.

She returned to college, and while the meal plan sounded like a good idea, she was only able to keep the routine for just over a week. She started to more often notice and obsess over areas of her body that she wasn’t as confident in, so she felt she had to do something about it, as she didn’t want to turn back into the girl her father would often tease. Others at school knew she was on this meal plan, so she couldn’t just change what she was eating, drastically, and tip them off as to her lack of discipline and ability to follow directions. As a result, she felt her only option was to eat the recommended meal plan, but vomit as often as she could, after each meal, so that the food wouldn’t have the negative effects on her figure she was so scared about. Her eating disorder developed into what’s known as Bulimia. What frustrated her most however was that, despite keeping up with the consistent purging, she seemed to stay the exact same weight. She craved the highs of others praising her for her weight loss, and now was no longer hearing those same positive comments. After a late night that included what many college students do, drinking until all hours, Kayla opened up to her best friend about how she would often throw up the food she ate. Fortunately, that friend’s mother was a nutritionist who worked at a nearby facility with a psychologist. The friend brought Kayla to see her mom and the psychologist at their offices, and a reasonable plan of exercise, diet, and therapy was designed so that Kayla could return to proper health, but still feel confident she was doing things that would help her look her healthiest. She credits her friend and that friend’s mom’s practice with having given her a true life back.

Fast forward 20 years, and while she has her share of relapses, and periods where she compares herself mercifully to others while wondering how she can “keep up,” she has developed a great plan she sticks and it helps her maintain a stable weight that she is happy with. She’s married and has two amazing kids. She began taking Kabbalah classes which opened her up to a new spirituality. She learned to meditate, practice yoga, and most importantly now shares her story to help others who face similar thoughts and obstacles she did as a child. Kayla knows that no matter how you alter the outside, it doesn’t change who you are on the inside. She is still learning to love herself unconditionally, and she knows that there is no quick fix to happiness. It is through the process that she’s learned how strong she really is…but it’s a process she’s enjoying and using to help others!

Learn STARR Exercises that can help those of us with Eating Disorders: