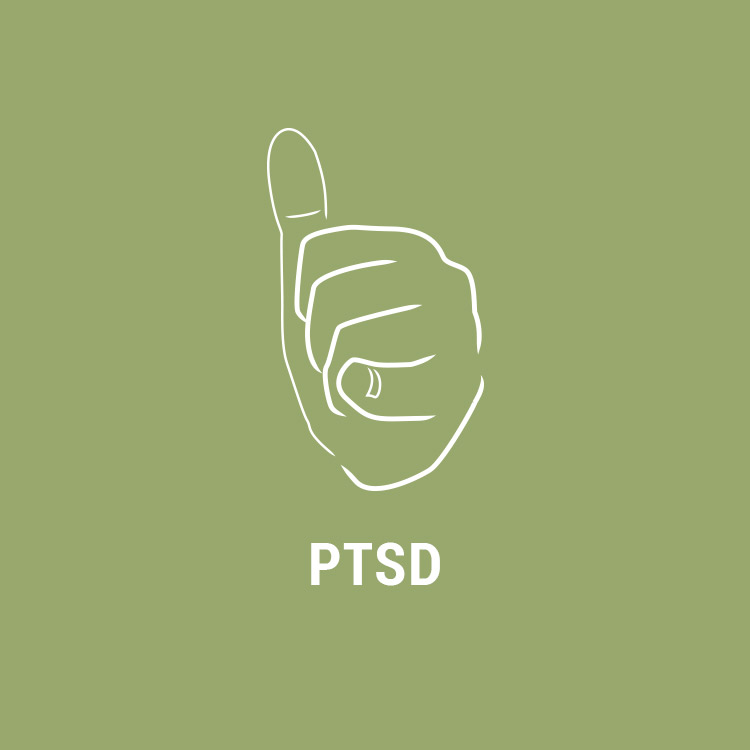 This Post Traumatic Stress Disorder (“PTSD”) profile was created by combining stories of life experiences, lived by a number of individuals who have battled this condition. We hope you or your loved one find peace in identifying with any/all of these symptoms, because it will show you that you are far from alone. In fact, after reading these profiles, feel free to check out these stories of everyday #SameHere Heroes, as well as Celebrities, all of whom have faced their own mental health hurdles, showing that life challenges do not discriminate.

Some Common Symptoms: Flashbacks, dreams, and intrusive thoughts pertaining to past trauma(s) that may have spanned from living through a natural disaster to a bad car accident to physical/emotional abuse, actively staying away from stimuli that reminds one of the past trauma(s) experienced, cognitive impairment including dissociation, poor memory related to the traumatic event(s) or any memories in general, overall fuzzy processing, being easily aroused when presented with a scenario or stimuli that reminds the person of their past trauma(s).

Kori’s Story:
Kori spent the first five years of her life living with her parents as an only child in the heart of Sydney, Australia. At five, her parents were divorced, and joint custody made it so that she went back and forth between her mother’s and father’s houses. Her mother kept the house Kori had been brought up in since she was an infant, while her father moved about 10 miles away, so as to still be near her only daughter. Her parents maintained an amicable relationship, but tensions heightened a little when her mother remarried a number of years after the divorce, and her new stepdad moved in, along with his daughter Melanie, who was three years older than Kori.

There was certainly some anxiousness that came with a new man and step-sister moving into the only house she’d even known, but Kori quickly grew to like both and actually enjoyed having them in the house.

During a school break two years after her stepdad and Melanie moved in, the whole family decided to go on a road trip vacation, driving up the eastern coast of Australia. After an enjoyable first four days stopping in a number of cities along the coast, they decided to go travel late into the night to reach their next destination on their path up north. That decision proved costly, as late in the night, a car driving in the opposite lane across a highly trafficked, dimly lit road, swerved out of control, and collided head on with Kori’s family’s car, with both cars traveling at relatively high speeds. The results were horrific for Kori’s family. Her step-father’s head smashed into the windshield, creating a bloody gash under his eyebrow. Her mother, locked tightly in her seatbelt experienced terrible whiplash from the collision, and could barely move her neck. Melanie took perhaps the biggest blow, with the side she was sitting on collapsing on her, after the other car spun into her side, crushing her femur bone. Kori’s head hit the back of her mother’s head rest and was bruised badly, but by comparison, she escaped the crash in relatively good physical condition.

The next few months were filled with hospital visits to see Melanie in traction for her leg, her mom going to physical therapy for her neck, and her step dad sporting a nasty scar that was hard not to notice as it healed. Kori’s bruise hurt for some time, but eventually healed, and as the selfless person she was, she lost herself in her concerns for the others in her family.

Emotionally everything seemed fine, but Kori experienced some vivid nightmares, reliving the whole accident itself over the next four months, walking up in a pool of sweat. Her doctors told her this was a “normal” response to a traumatic event, and she would eventually come to terms with what happened and feel more comfortable. Every time the thought came into her mind during the day, she just pushed it to the back of her head, hoping the “natural processing” of it would take over, and she’d almost forget it ever happened.

About a year after the accident, Kori’s biological father was having members of his extended family in from out of town, and asked her to come and spend time with them, and stay the weekend. This turned out to be one of the more horrific weekends of Kori’s life. Kori had her own room in her father’s house that she had grown to love, after all the times she stayed by him. However, on the second night of the weekend, when Kori was only 15, the husband of her father’s biological cousin, came into Kori’s room late at night, sat on her bed, and started making unusual advances at her, asking her if she had a boyfriend in school, and whether she had even “been” with a man. Kori felt extremely uncomfortable and asked the man to leave her room. She cried herself to sleep that night, and when she woke up, she told her father about the events of the night before. Her father spoke to his cousin and her husband and demanded that they leave immediately. The event was certainly traumatic for Kori, but she kept reminding herself that this man must have had “issues” and that most men were not like that. Kori’s father offered to talk with her about it, but it was just too uncomfortable for her to speak about the event with her dad.

As Kori became of age to drive, although it meant she would gain some independence and her mom and dad told her they would come together for the first time since their divorce and help her pick out a nice, safe car, Kori decided she didn’t care to get her license. She had no problem getting in the car when someone else was driving, but the thought of her getting behind the wheel, and worrying about another car losing control and coming at her head on, obsessively raced through her mind. She relied on her friends to drive her around when she wanted to go places.

Even when she left for university, she chose a school in the heart of a big city that was not too far from home, so that she could take public transportation to get to and from school, and could walk to most places once on campus. She pledged a sorority, and made many friends her freshman year. She was interested in some of the freshman boys she met that first year, but never felt comfortable going to sorority or fraternity parties, and shied away from the formals that most of the sisters in her house attended with dates.

As sophomore year came around, she did become friendly with a group of girls who congregated often with the same group of guys, and one night, as it was getting late, one of the boys in the group followed Kori to her room and asked if she’d be interested in watching a movie together on her couch. The question made Kori very uncomfortable. She screamed at the boy and told him she had no interest in watching any movies, and closed and locked her door on him. The whole incident upset her, even though her girl friends couldn’t understand why she reacted the way she did, Kori refused to open up to them and talk about the events of the night before. Kori decided she didn’t feel comfortable staying at school, and ultimately decided to take the bus back home to her mother and stepfather’s house, to take a break.

What ensued for the next two weeks was not pretty. Kori complained of a difficulty concentrating even when trying to watch mindless TV. She figured getting away from school and the boy who made her uncomfortable would help clear her mind, but instead she stayed in her room, ruminated about the uncomfortable events, and spent hours on end, just staring at the ceiling, without a desire to leave her room. Kori’s friend, who didn’t go to college after high school, called her up and convinced her to go out one night for a few drinks. To escape some of the feelings she had been fighting, Kori decided a few drinks wouldn’t hurt, and she left that night feeling a little better after indulging in a few. What started as an innocent night out however, turned into a four times a week occurrence with this friend, going out and drinking heavily each time they met up. When Kori’s mom and step dad approached her about returning back to school to finish her semester, Kori had no interest in doing so, and said she was enjoying just staying at home. She was also scared to go back because she was experiencing what she described as “out of body” feelings, like there was someone else living in her body, and she was just observing herself from the outside.

It was at that moment, Kori’s biological dad joined in on the conversation with her mom and step dad, and they collectively convinced Kori to go to family counseling to get to the bottom of Kori’s behavior, drinking, and lack of desire to return to school. After speaking as a group, and hearing Kori open up as much as she could (she was still experiencing numbness and even partial memory loss with respect to her traumatic experiences), the psychiatrist diagnosed Kori with PTSD, or Post Traumatic Stress Disorder. According to the doctor, the major car accident left an intense fear in Kori’s mind that traveling (and especially driving) in any car could result in her getting into the same type of accident she had been in with her mom and stepdad years ago. Likewise, her dad’s cousin’s husband had “ruined her innocence” and although nothing actually “happened” that night, physically, the whole incident caused Kori to develop a fear of all men, to the point where she practiced avoidance of being alone with them in any and all situations.

The psychiatrist recommended two treatments from specialists to help her manage her stress and trauma from both of these horrific events: EMDR, and Havening. Both practices would work to help Kori to “reprocess” both of these traumatic events in a more healthy fashion, so that the thought of them would not paralyze her as much as they had in the past. After months of practicing both therapies with specialists, Kori started to feel better, and even returned back to school, was able to drive there herself, and got into a relationship with a boy from a nearby fraternity house, who was also from Sydney originally, and as gentle and sweet as could be.

Kori graduated and moved back to Sydney, but got her own place, after landing a job as an accountant right of out school. She now continues to date, and even drives to and from work on a daily basis. She gets flashbacks every so often when she gets in her car, but she knows how to cope with those feelings and get past them, to turn on her car and begin driving. She continues to do other STARR therapies to keep her PTSD at bay, including Yin Yoga, and Integrative Breathing Practices. She does often live in fear that another awful experience is just around the corner, but her practices have taught her to live day-by-day, and just enjoy what she can control, not allowing her past to keep her back or define her.

Learn STARR Exercises that can help those of us with PTSD: