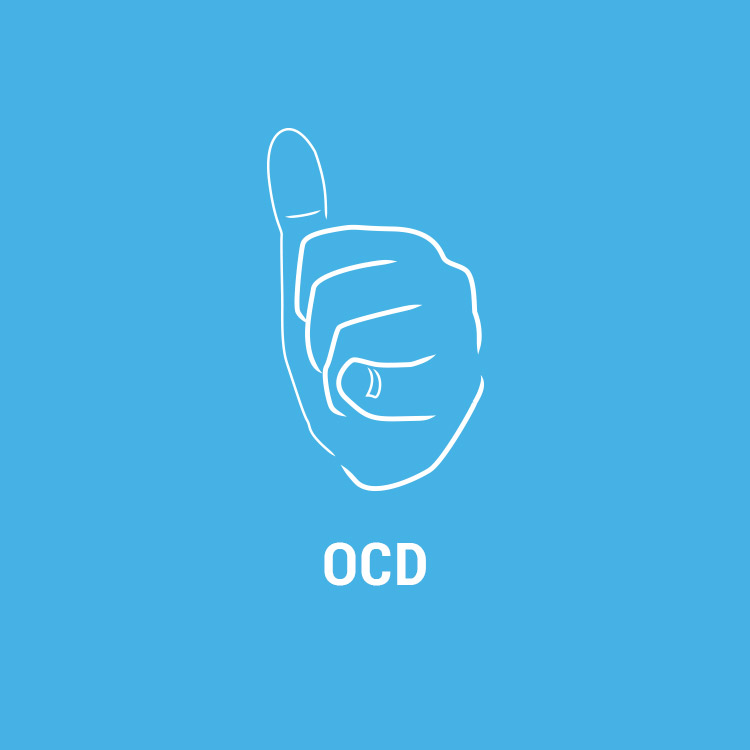 This Obsessive Compulsive Disorder (OCD) profile was created by combining stories of life experiences, lived by a number of individuals who have battled this condition. We hope you or your loved one find peace in identifying with any/all of these symptoms, because it will show you that you are far from alone. In fact, after reading these profiles, feel free to check out these stories of everyday #SameHere Heroes, as well as Celebrities, all of whom have faced their own mental health hurdles, showing that life challenges do not discriminate.

Some Common Symptoms: Obsessive Compulsive Disorder, or OCD, involves consistent ruminations or intrusive thoughts that play over and over again in one’s mind (often for more than an hour each day)…these repetitive thoughts are considered “Obsessions,” while at the same time, those with this disorder repeat rituals or “Compulsions” over and over again as it feels to those facing this condition as though they can relieve some of the anxiety related to their thoughts with these repeated actions; often those who are challenged by this condition know their thoughts and/or actions are irrational, but this knowledge is not enough for them to put a stop to them.

Oliver was raised  just outside of Stockholm, Sweden. He was very close with his entire family, as his parents had him (an only child) at a very young age, and therefore his grandparents were very involved in his upbringing.  They’d have large family gatherings, with both his mother and father’s side of the family, often.  Because he was their only grandchild, he was constantly showered with love and attention.

At a young age, Oliver would get beyond frustrated as he was playing with his toys, often trying to put together different puzzles, or build models, when they didn’t turn out the way he expected.  He’d get so frustrated, he’d throw these games and toys against the wall, and would just leave them there.  Sticklers for a clean and orderly house, his father, and most often his mother’s father, would witness Oliver’s behavior, and follow-up after his tantrums, picking up his games and toys and putting them neatly back on the shelf from which they came.

Oliver didn’t understand the need to put these items back exactly in the same spot, but he’d just ignore his family’s actions and their consistent need for order.

As Oliver began school, he was excited to buy school supplies with his dad.  His father, an assistant principal at a local school, loved to go to the store to pick out items at the beginning of each new school year. He’d describe it as a way to “start fresh.”  His favorite activity was to buy different folders of what seemed to Oliver like – every color in the rainbow.  Oliver would ask why he’d get so many different colors, and his dad would let him know that organizing subjects and responsibilities by color would help him best keep himself orderly and on task. His dad was a successful accountant, and the colors helped him break things out based on important categories such as: name of his clients, individuals vs. companies, those who would be paying out taxes vs. receiving a refund, etc.  Though he was too young to have “subjects” in school, the idea of different colors for different topics appealed to Oliver as well, and so for every colored folder he purchased, his dad would buy Oliver his own folder as well.

As Oliver started to go to school and then come back on the bus each afternoon, his mom would come out of the house and wait excitedly for her son to return to their porch. She noticed that he would skip joyfully off the bus, as if he just had experienced the best day at school, but would never do a straight line across their lawn to come see her and hug her.  Instead he’d take the longer route around the path that led circuitously to their house. She chalked this pattern up to his maturity at a young age, knowing that running on the grass could ruin the way it grew so nicely.

As he went on to later grades in elementary school, Oliver would get more and more complicated homework.  His parents noticed, in using a pencil, Michael would write out answers, only to erase them and then rewrite the same answers, more neatly in the same spot.  Once again, his parents believed they had a perfectionist on their hands, one who was super concerned with how he came off to others – them, his teachers, his friends, etc.

One weekend, his parents brought Oliver to the orientation program for a baseball little league they were getting him involved in.  They witnessed some peculiar behavior as Oliver began sitting on his hands rocking back and forth, eventually leaving the orientation, running to the exit, as the commissioner was in the middle of his presentation.   His parents followed him out of the room, went to find him, and when they did, he refused to go back to the room.  He told them he didn’t like the commissioner, and didn’t want to play in his league.

His parents, while frustrated by this behavior, passed it off as “a kid being a kid,” and some jitters related to being nervous when meeting so many other new kids from town in the league at one time.

Never thinking any of his behavior, outwardly, was “too different” or concerning, Oliver’s parents never thought to take him to a doctor for some of what they referred to as his – “quirky behaviors.”

Oliver grew up, and would eventually take the same path of his father – going to school for accounting and working at a large firm.  He lived about an hour from his parents, and enjoyed his own space, while still being close enough to visit often.  As a young adult, even Oliver noticed that some of his thoughts and behaviors were different than others – and even some of the things he thought about weren’t “average” thoughts that others were likely thinking at the same time.  For example, Oliver would think over and over again about calling his parents to check in on them.  It wasn’t that he thought it was different that he cared to call them.  But he felt this anxious feeling as if he went a day without calling them, something bad was going to happen to them.

He noticed too he was taking on some of the traits of his father in terms of how he took care of his house.  He couldn’t go to bed at night without checking that his stove was off, even if he hadn’t used it that day/night.  He also felt the need to lean into his front door and turn the knob to make sure it was locked exactly 3 times before believing no one would be able to get in during the night. Still, Oliver pushed on, just thinking he was a little unique and following in some of his dad/family’s quirky ways.

This all came to a head when Oliver sat through a large presentation at his accounting firm, where all of the employees were required to go.  As his CEO was presenting during this 2 hour meeting in the firm’s largest conference room, Oliver started to get thoughts in his mind like he was going to blurt out something offensive at this senior leader, in front of all the company’s employees.  He knew he didn’t want to say anything offensive and risk his own reputation or even job, but it was like something was taking over his mind and daring him to do it.  He found a way to excuse himself from the meeting, and went to the bathroom, staying there for the next half hour, until the meeting ended.  Scared that he felt like he had lost a little control of his own mind, he booked an appointment with his general practitioner to discuss these feelings going on in his head.  This practitioner listened to his story – related to the big meeting and some of the other “quirky” behaviors of the past, and suggested that Oliver may be struggling with OCD, or Obsessive Compulsive Disorder.  He recommended that Oliver go to a psychiatrist to make sure his diagnosis was accurate.

At the psychiatrist, Oliver once again shared his full story, going back through all of the thoughts and behaviors his parents had pointed out to him, and, he himself, felt were “different from others” since childhood.  The psychiatrist did agree with the general practitioner that Oliver was suffering with OCD, likely as far back as when he was a little kid.  He explained to Oliver that thoughts – like the ones about something happening to his parents if he didn’t call, the ones about blurting things out in meetings (which was similar to thoughts he had at the little league meeting way back when), were called “obsessions” and were essentially circling around in his brain until he “did something about them.”  Whereas as most people get an uncomfortable thought and then after thinking that thought, move on to the next more comfortable thought, Oliver had thought patterns that repeatedly ran certain ideas in a circular motion, in his mind.  As far as the “quirky” things others had noticed in him, and he in himself – like the checking his doorknob three times before bed, always checking his stove, and even not running on his parent’s grass as a kid, these were all considered “compulsive behaviors” or rituals, that Oliver felt the need to complete, in order to rid himself of anxiety of not doing them.  The doctor assured him, this was not a very uncommon diagnosis, and that with exercises like breathing practices to lower his anxiety, and CBT or Cognitive Behavioral Therapy, he could learn to restructure his thought patterns and not feel like they were “in control of him.”

Oliver found an incredible CBT therapist in town, and within weeks, started to feel relief from the paralyzing thoughts. He still has his “days” where he knows to do breathing exercises and even actively try to replace thoughts when he begins to think in a loop, but overall, he feels as if this “control over his mind” has dissipated and he feels freed from its grasp.  He now feels in full control.

Learn STARR Exercises that can help those of us with Obsessive Compulsive Disorder: