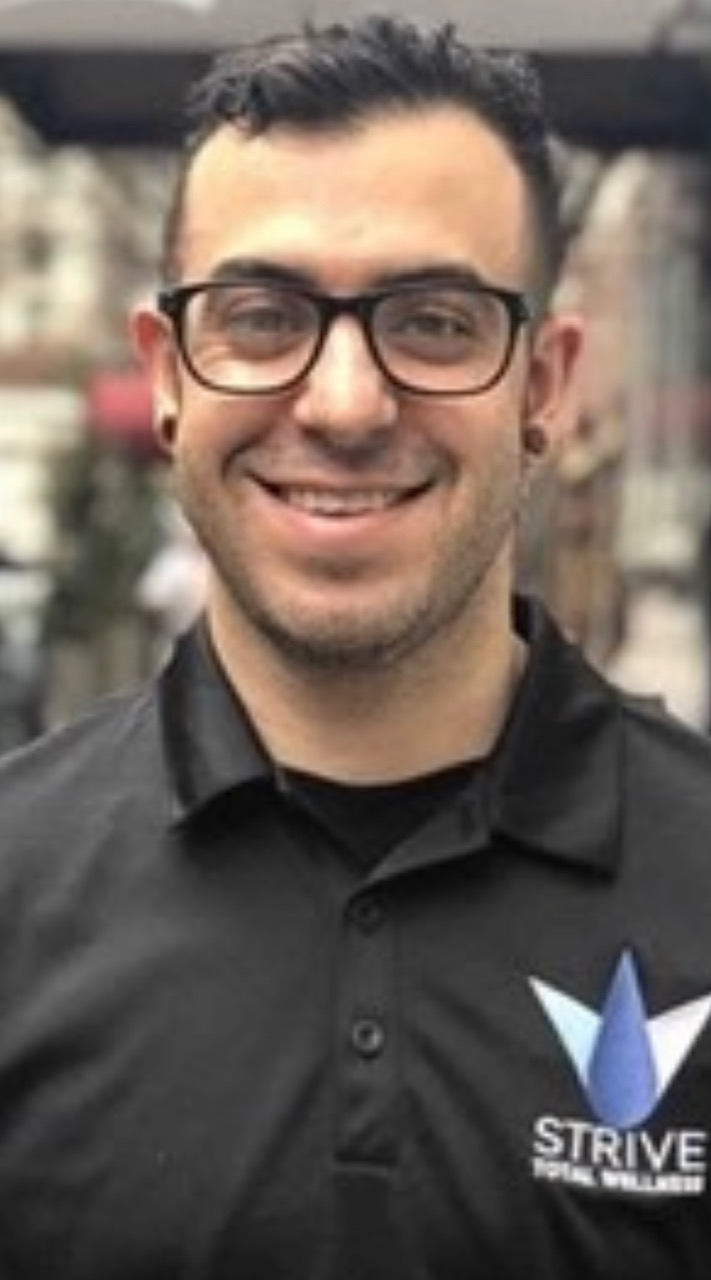 Dr. Vinny Tagliaferro spent a lifetime destroying his body in light of athletic pursuits. As a high school gymnast, college ice hockey player, and elite Olympic weightlifter, Dr. Vinny has suffered a multitude of minor and major injuries throughout his life, including multiple concussions and head trauma. The constant strain of pushing his body to its breaking point led him down the path of becoming a sports rehabilitation-focused chiropractor.

Always interested in improving movement and sports performance, he began his career by teaching gymnastics to toddlers and eventually coaching gymnasts at the collegiate level. Dr. Vinny began college at The Ohio State University where he played for the Columbus Junior Blue Jackets in the USHL. After suffering a career-ending injury he moved on to Temple University in Philadelphia where he completed his Bachelor’s degree in Kinesiology.

Following undergrad, Dr. Vinny moved on to New York Chiropractic College where he completed his Doctorate of Chiropractic as well as his Advanced Degree in Human Movement Sciences. While at New York Chiropractic College he acted as Treasurer of the Rehabilitation to Performance Club, Representative of the Motion Palpation Club, and was a tutor for Radiographic Imaging and Diagnostic Studies. During his residency, Dr. Vinny was awarded two separate honors internships while functioning as a CrossFit instructor and Crunch Master Trainer.

After graduating from NYCC in 2015, Dr. Vinny began practicing chiropractic in New York City where he had the honor of being the chiropractor for the Martha Graham Dance Company as well as Ballet Hispanico. He has treated everyone from desk jockeys to broadway actresses and professional bodybuilders. During his tenure in New York City, Dr. Vinny competed as an Olympic weightlifter finishing in the top 100 lifters in the country.

Following a personal experience with multiple head traumas and a lengthy history of Major Depressive Disorder, he began to shift his focus on improving his patients’ health by incorporating functional medicine to address the root cause of disease and illness. Dr. Vinny completed a post-graduate study in Nutrition and received his certificate as a Functional Medicine Practitioner from FMU in 2021.

Thirty years of experience with Major Depressive Disorder and twelve concussions have greatly impacted my focus on mental health and preserving the human mind. I know from firsthand experience how greatly mental health can impact physical and mental performance.

The impact is hard to conceive. I have been through being told to “toughen up”, to going through multiple rounds of multiple different prescription drugs changing on a dime. These treatments only made things worse. From personal experience, these issues were better suited for talk therapy, nutrition focus, and psychedelic therapy. My goal is to impact others on a holistic approach to chronic issues that have not been addressed by the current-day model.

When and why did you decide to actually focus on working with patients dealing with mental health issues, specifically, and how was your decision shaped by the experiences above?

During the height of the pandemic, I personally endured a steep decline in mental health and suffered 3 concussions in one week. Surrounding that I also battled suicidal ideation and attempts. After heavy support from friends, colleagues, and family I attempted multiple different means to change my situation. I was very fortunate and I am very grateful that I was in a situation where others offered assistance. I want to be there for individuals who are suffering similarly to how I was suffering.

I like to slow down the process and truly get to know an individual before determining whether I can help them or not. After understanding what they’re going through I utilize an in-depth analysis of multiple different lifestyle factors to paint a well-rounded picture of each person. Looking at past medical history, dietary logs, sleep habits, activity level, relaxation/meditation techniques, and diagnostic testing (blood, stool, food sensitivity) to determine which area needs improvement and to what degree.