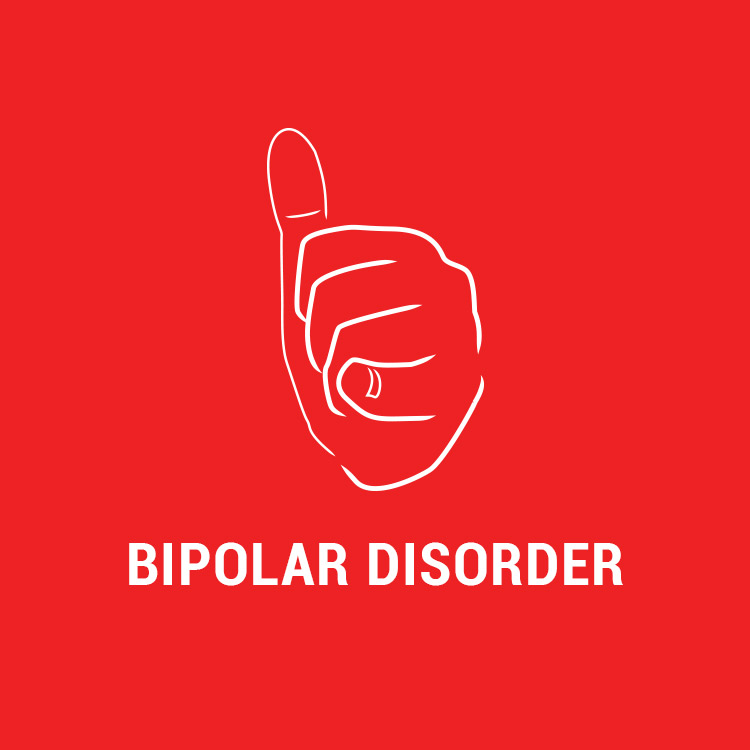 This Bipolar Disorder profile was created by combining stories of life experiences, lived by a number of individuals who have battled this condition. We hope you or your loved one find peace in identifying with any/all of these symptoms, because it will show you that you are far from alone. In fact, after reading these profiles, feel free to check out these stories of everyday #SameHere Heroes, as well as Celebrities, all of whom have faced their own mental health hurdles, showing that life challenges do not discriminate.

Some Common Symptoms: With Bipolar, individuals usually experience large changes/shifts in their mood from extremely high (mania, or hypomania – which is a less drastic high) to extremely low (depression); in either of these states a person’s energy and ability to think clearly may be affected, the fluctuations from high to low can happen close to one another (almost simultaneously) or even be spread out years apart; during mania individuals often act impulsively and recklessly with their decisions and take risks they wouldn’t otherwise take, whereas during their depressive episodes they may have difficulty functioning at all including an inability to leave their beds, sleeping way too much or not being able to fall asleep at all, and lacking the energy and even ability to make simple everyday decision.

Keith had a fairly “uneventful” childhood. He grew up in a small community in Oregon, where his family owned a dairy farm. He was the oldest of three children. His family was big into sports and school, and he had many friends growing up. There was really nothing atypical about his family. His parents rarely fought, and he and his brothers were above average students. Besides the occasional school yard scuffle, there was really no trouble in Keith’s early school years. He was described as pleasant in class, even a bit on the “overly” social side. He was a leader among his peers and most often made the right choices.

At home Keith’s parents focused on work, school, sports, family, and faith. He had a large extended family which lived in nearby towns. Three of the males in his biological family had previously been diagnosed with severe depression (they hadn’t had thorough psychiatric evaluations, but this is what they were each told by their general practitioners). Two of the three, both uncles of his, died by suicide in their mid 40s. Additionally, a first cousin of his, it was rumored, would get in scuffles with police often because of what was referred to as “over-aggressiveness.” That cousin got caught up in the criminal justice system

When he was a teen, his parents started noticing some odd behavior from Keith. He started sleeping less, losing weight rapidly, but oddly despite these changes, he seemed happier than ever. It was as if he was suddenly filled with extra energy and motivation. His family would catch him on the phone talking to friends until all hours of the night, when he should have been sleeping. He had just gotten his driver’s license and was staying out late. He even was slapped with a speeding ticket for reckless driving. His parents thought he was just going through some rebellious behavior and they wanted to be careful about how they approached the topic with him. They were, however, getting scared because he was getting more and more volatile by the day. Teachers who his parents spoke with described him as “beyond friendly” – so friendly that between class periods, Keith could be seen interacting with everyone he passed in the halls, but to the point where some students actually went out of their way to avoid him.

Keith’s parents got a call one day from his high school notifying them that Keith had ditched class and was caught at a neighboring school, sneaking into a female student’s class whom he had been talking to a lot on the phone. His parents just couldn’t make sense of what was going on. Keith himself didn’t see anything wrong with his behavior and just said his parents needed to back off and let him have a little fun. One comment in particular that concerned them, was that he felt like school didn’t matter anyway, stating “if do get suspended for doing something so minor, it won’t matter anyway, because even without an education I can start a business and make millions off of my ideas, easily.”

The next day after the school incident, his mother got a call from one of his best friends, claiming that Keith had been calling his home to speak to him until 3am, and that Keith sounded wide awake when his friend finally relented and picked up after many attempts. Concern from everyone, due to his comments and actions was reaching a feverish pitch.

Keith’s parents quickly made him an appointment and took him to the family doctor, to try to get to the bottom of his behaviors. Having seen him for years, and never having noticed these types of actions, that doctor recommended to his parents that they take Keith to a psychiatrist for a formal evaluation. A week later, after a two-hour evaluation session with a local psychiatrist, Keith was diagnosed with Bipolar Disorder, Type I. Apparently what Keith was experiencing, which explained his school behavior and comments, was a manic episode. The psychiatrist prescribed a mood stabilizing medication, and had Keith stay for one week, in-patient, at the hospital, while he adjusted to the med dosage, and made sure Keith came down from the mania. He also made sure Keith learned foundational skills of Cognitive Behavioral Therapy.

After his time in the hospital, Keith stayed on the medications and it appeared his mood was in a “stable” place. However, after a couple of weeks and the painful news that his maternal grandmother passed away, Keith started having side effects that were causing him to not want to see anyone and just stay in bed all day. Keith spoke to a therapist regularly and tried his best to take his meds but he hated the way they made him feel – almost numb. Despite his aversion, he stayed on the meds and his mood started to “level out” to the point where he returned to school, and ultimately graduated and went on to college.

At college, he played baseball for the school’s team, had many friends, maintained a solid B average, and was fortunate to enjoy a good balance of work and social life.

Keith’s senior year was when things started to once again get very stressful. His classes were hard and he due to a disagreement with his manager, lost his starting spot on the baseball team – so his sole focuses became studying and seeing his friends. He was spending more and more time is his room in his apartment he shared with his friends. He started isolating himself and was starting to skip class because he was just too tired to get up. He knew he had to do something to get out of this rut.  He visited the therapist on campus, and they went through his history together. This time, the therapist thought Keith might be suffering from unipolar depression, a complication that might’ve been exacerbated by his stressful semester.

Keith’s med was changed by the doctor on campus, and within a few weeks Keith was feeling a bit back to himself. He was able to start exercising again, and was back going to all his classes. He ended up graduating and landed a pretty good job in his field of study, near the hometown where he grew-up.

A few months after starting his new job, Keith was acting funny at work. He was being very forward with female coworkers and it was apparent that he wasn’t quite aware of his own erratic behavior. He was working through all hours of the night on projects and still arriving at work the next day, early in the morning, ready to go full-steam. His co-workers were growing increasingly uncomfortable by Keith’s loud, over-the-top behavior and they were starting to complain.

Keith was brought into HR and told to take a few weeks off by his boss, so that he could get a proper medical evaluation to assess his erratic behaviors. His company cared about his wellbeing and wanted to see him get help. They also knew they had to address some of his previous behaviors with other employees he had affected.

Despite being an adult, Keith’s parents got involved once again, and concerned for his career and well-being, took him to one of the top psychiatrists they had researched in town. After going through Keith’s history, the doctor was certain that Keith’s formal diagnosis was Bipolar Disorder, Type I. The doctor explained that one can experience symptoms at a young age and then not experience them again for years. Then the stress of college likely caused a low period. Keith had been on the right medication, but failed to disclose some of the manic episodes he had experienced as a child. The medical center at school mistook his down period for unipolar depression, and changed his prescription to one more focused on that diagnosis. After graduation, the excitement of the new job and all that independent life had to offer caused another manic state, for which the medication the school had put him on was insufficient to help keep symptoms in balanced. Keith was given short-term disability from work while he tried different combinations of medicines and started learning and practicing yoga and meditation.

Keith now takes mood-stabilizing medication specific for Bipolar, Type I, but he relies mostly on his practices like yoga, regular exercise, and meditation to balance the highs and lows. He sees his doctor regularly so his meds can be monitored.

Keith is now married, and has two kids of his own. He thrives at work, he’s careful not to get too stressed out, and always makes time for himself to “take a break” in the middle of hard days. His wife is fully aware of Keith’s diagnosis and does what she can to make sure that Keith has time for his meditation and yoga as she notices that seems to really keep his mind healthy and his spirits up when he focuses on self-care.

Learn STARR Exercises that can help those of us with Bipolar Disorder: