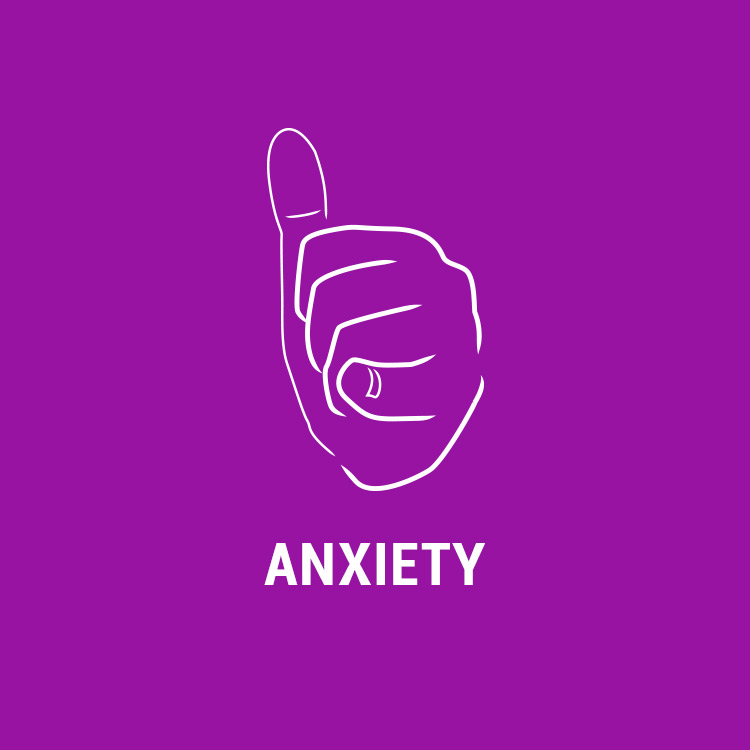 This Anxiety profile was created by combining stories of life experiences, lived by a number of individuals who have battled this condition – including Generalized Anxiety Disorder and Social Anxiety Disorder. We hope you or your loved one find peace in identifying with any/all of these symptoms, because it will show you that you are far from alone. In fact, after reading these profiles, feel free to check out these stories of everyday #SameHere Heroes, as well as Celebrities, all of whom have faced their own mental health hurdles, showing that life challenges do not discriminate.

Some Common Symptoms: Anxiety has one of the longest lists of symptoms of any disorder – both mental and physical such as, overwhelming fear and worries about situations that wouldn’t appear to be life-threatening or dangerous, catastrophizing and thinking often about the “worst-case scenarios,” jumpiness, apprehension to try new things or explore new areas, tension, sweating more than usual, racing and pounding heart, tremors/twitching, fatigue coupled with insomnia, needing to go to the bathroom often, diarrhea and overall upset stomach and headaches.

Michael grew up in a suburban town outside of Toronto. He lived in a very family-oriented community that was known for its public school system, which was considered one of the best in the whole Province. This community was shielded from crime and danger; children played freely outside, parents kept houses unlocked, and the police were very much present and felt in partnership with the residents.

At a young age, Michael’s parents noticed that despite the peaceful nature of his surroundings, and the lack of any life-altering events, he was always worried, even full of fear. He insisted that his mother hold his hand tightly as he walked into his preschool class each morning, and would run back after her when it was time for her to leave. Although he was quiet, he took pride in several preschool activities. He smiled frequently and often even giggled, but his demeanor exhibited a stark change when it came to being asked to do things he didn’t want to do. For example, when it was music time and the children were asked to hold hands and sing, Michael retreated to the corner and refused to participate. When a new lesson was introduced, Michael struggled or refused to pay attention. He did not like change. One of his teachers became his personal aide, always sitting by his side. As he became comfortable with her, he refused to do anything unless she was in the class, nearby.

At home, Michael threw tantrums not only when he didn’t get what he wanted, but also when things weren’t done his way, or when a certain routine had changed. He always insisted on putting on his pajamas, brushing his teeth, arranging his stuffed animals, and putting his favorite toy in its special box. He wouldn’t do it any other way. He developed a fear each time he went to bed, that he’d wake up and his parents wouldn’t be in the house anymore. Therefore, he chose to sleep in their bed each night and would scream and yell uncontrollably if his parents suggested he go back to his own bed.

As Michael progressed through elementary school, he increasingly complained of stomachaches, headaches, and even bouts of sweating that made him feel like he had temperature and the school was “too cold.” By the time he was in second grade, he had such terrible associations with coming through the doors each morning that it became almost impossible to get him to go to school each day. When he did go, he would most often end up at the nurse’s office. Numerous doctor’s visits and tests later, doctors concluded that there was “nothing wrong.” They told his parents he did not have anything structurally wrong with his stomach, his head, or even in his endocrine system that would cause any type of excess sweating. They dismissed his symptoms as likely just a result of the nerves that many young children deal with.

Michael refused to do assigned work at school. He would sit at his desk, agitated, shaking his knees, and unable to concentrate. He also got in trouble on a regular basis. He thought that by defying authority and causing a stir, he would be better liked by his classmates and would even receive more attention. This tactic didn’t work, however, and he began to withdraw from the other students in school. His even stopped interacting with his two closest friends who he had known since kindergarten, and was a loner in class, out in the schoolyard, and in the lunchroom.

In high school, this aversion to homework, school and even going out with friends became a bigger problem and topic of discussion in his family. Michael did not see the point in school; he rarely submitted assignments and received below-average grades on his exams. He tried to participate in one extra-curricular activity, baseball, and he only lasted for two days of try-outs, as he just felt like he didn’t fit in with the other students/players.

Michael managed to graduate from high school with a very low GPA, taking a job as a waiter at a local restaurant, but still living at home. He was finally “free” from school and some of the other students he just felt like he never fit in with.

Despite getting away from the agitation at school, things didn’t fully improve. He had difficulty sleeping. His mind raced with thoughts about the past, present, and future. He became aggressive towards his girlfriend and family members. He also began drinking on a regular basis because it was the only thing that seemed to slow the racing thoughts. One day, after coming home from work, he felt tingling in his fingertips and started calling for his parents. He told them the room felt like it was spinning, and then like the walls were caving in on him. It was like nothing he had ever experienced before in his life – even worse than the feelings of not fitting in at school. However, the symptoms subsided just before his parents were about to take him to the ER, to see if something was seriously wrong, physically, with his body.

Between that whole episode, as well as fearing that he was drinking too much even on some work nights when he’d come back home, Michael’s parents and girlfriend approached him together one afternoon and asked that he open up about what he was feeling, and why he was turning to alcohol. Michael wasn’t comfortable opening up completely with them, but he did agree to see a therapist, at their request.

After a two-hour evaluation with the therapist, where he revealed all that had been bothering him since childhood, Michael for the first time in his life was told that he had an anxiety disorder. This anxiety started at a young age and was clearly prevalent during his childhood. It contributed to his stubbornness, resistance, and fear of change. It interfered with his ability to see the future as something he could be in control of creating and excited about. While the therapist believed he suffered from Generalized Anxiety, he also believed he had components of Social Anxiety – because of his aversion and irrational fears about mixing with other kids his age. Lastly, when Michael described the feeling of the room spinning and then collapsing on him, that scary time after work, the therapist said this “reaction” can often come along with anxiety disorders and was called a “Panic Attack.” While they were scary to go through, the doctor calmed some of Michael’s fears by saying he did not believe any of the experience he described was related to any physical conditions involving his heart, or lungs.

For years, Michael had yearned for control, for order, for respect, for admiration, and recognition. For years, he tried to control his seemingly uncontrollable life by doing things his way or by not doing them at all. By getting this diagnosis, Michael better understood that there was a reason why he never fully felt at ease and comfortable.

From therapy, Michael has learned how anxiety impacted his life; at the same time, he has learned how to control his anxiety. He has learned that anxiety doesn’t go away completely and that a certain amount of anxiety is even a good thing in terms of motivating us to do what we need.

Michael has learned to recognize situations over which he has no control and how to navigate anxiety-inducing situations using several methods on the STARR Practices list including Integrative Breathing, Qigong Meditation, and Yin (or Restorative) Yoga. He also openly communicates that he has anxiety to those he is around when it strikes, as he finds putting it all out there actually makes him less anxious overall. It’s the “act” he often has had to put on, that everything was always “ok,” that has been more anxiety provoking than anything. He’s also been surprised to hear back from many he’s opened up to, that they have anxiety too. It seems that it’s more common than he believed throughout childhood and even early adulthood, and simply knowing he’s by far not the only one who deals with these feelings, has made the anxiety itself lessen tremendously.

Learn STARR Exercises that can help those of us with various forms of Anxiety Disorders: