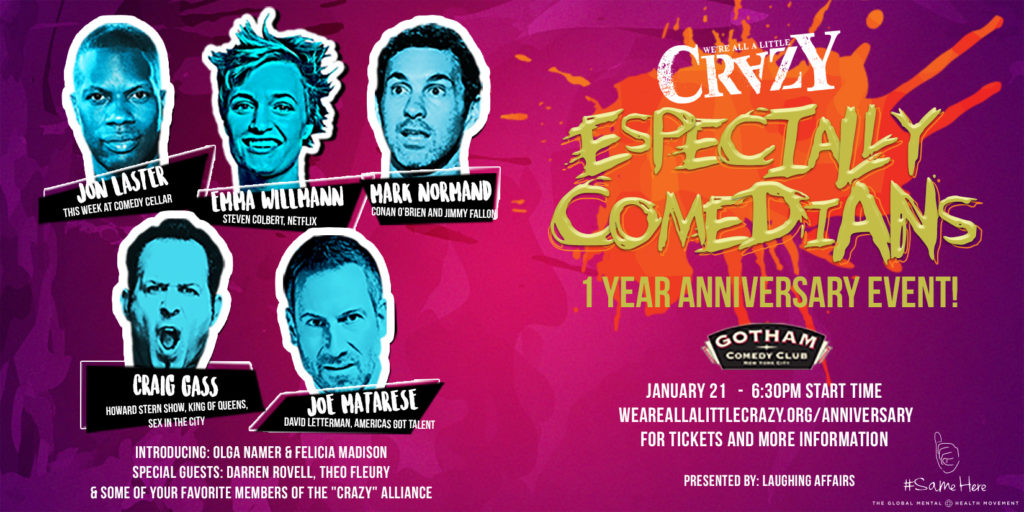 On January 21st, 2019, starting at 6:30pm, at Gotham Comedy Club in NYC, We’re All A Little “Crazy’s” Global Mental Health Alliance, in partnership with “Laughing Affairs,” will be hosting our 1 Year Anniversary Event.  As the Alliance started mostly with athletes, and has since begun to include actors, musicians and other entertainers, the time was right to begin to include comedians.  As you’ll see the night should prove to be quite a barrel of laughs and good times, featuring comedians with some incredible credits ranging from the Howard Stern Show to Letterman to Conan, as well as their own comedy specials.  A presentation about this year’s progress surrounding the #SameHere Movement’s efforts will be part of the “show” as well as a full silent auction with exciting items, and some of the Alliances sports and entertainment stars.

Tickets are $55 each, a play on the message that mental health is a topic for “5 out of 5” of us, not only the 1 out of 5 with disorders we hear about so often.

Because we are an organization that focuses on improving the lives of all segments of society that are affected, including Veterans, if you are from out of town, or can’t make the event, you can sponsor a Veteran for $22, to attend and to show these brave men and women, that when it comes to mental health we are all in it together.  $22 was chosen because we lose an astonishing 22 Vets per DAY in this country to suicide, and that must slow down and eventually stop!  From his time working in professional sports, Eric has many relationships with Veterans Organizations he used to gift sponsored tickets to games to, so we know they will be put to good use, by deserving people.

Last year, to launch the Alliance/Movement, there were over 400 supporters in attendance. Because Gotham only comfortably holds 300, we ask that those who are interested, get their tickets right when they become available.  We are hopeful that this will be an annual celebratory event that you look forward to each year – seeing many of the same people who helped us launch this movement, the progress we are making together as one big team, and the plans for the future.

*Food and drinks will be available for purchase directly at your tables, conveniently from waiters and waitresses who will be working that night.

We can’t wait to see you there!