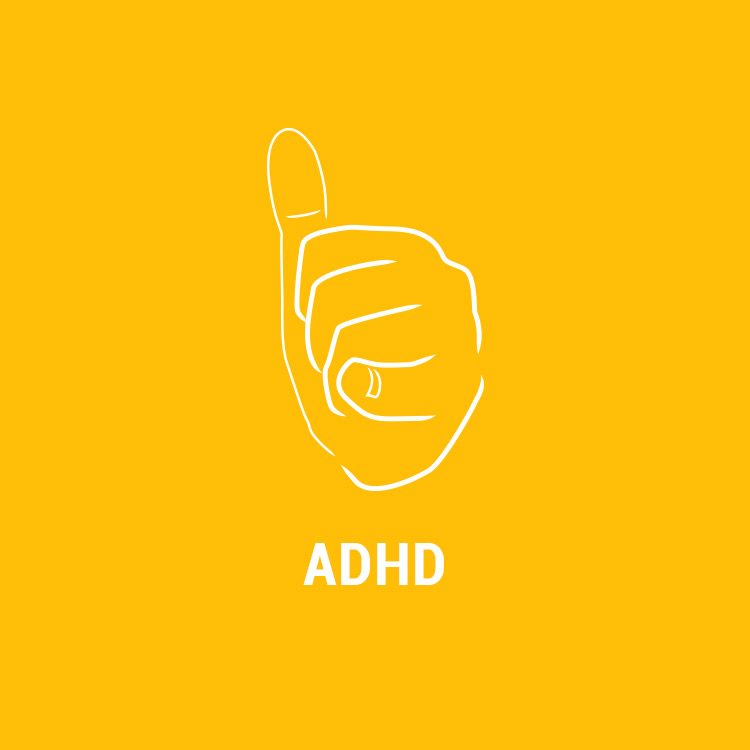 This Attention Deficit Hyperactivity Disorder (“ADHD”) profile was created by combining stories of life experiences, lived by a number of individuals who have battled this condition. We hope you or your loved one find peace in identifying with any/all of these symptoms, because it will show you that you are far from alone. In fact, after reading these profiles, feel free to check out these stories of everyday #SameHere Heroes, as well as Celebrities, all of whom have faced their own mental health hurdles, showing that life challenges do not discriminate.

Some Common Symptoms: Inability to keep focus or stay attentive, easily distracted, getting bored often, hyperactivity (especially in children), doing things in an impulsive nature/not considering the consequences, easily losing objects (like toys or keys), hard to follow/process simple directions, fidgeting (like touching everything in someone else’s room), lack of patience in waiting for a turn.

Ellie grew up in a suburb of Philadelphia in a very family-friendly community. She was the youngest of four, and the only girl in the family besides her mother. From the time she was in college, herself, her mother was a chain smoker. She managed to quit for each of her three prior pregnancies, only to turn back to her habit that helped soothe her anxious feelings. This pattern made it particularly hard to quit when she was pregnant with Ellie. She admitted that for the first trimester of that pregnancy, she did sneak in a few cigarettes a day, until she finally quit for good after watching a very scary documentary about the effects of long-term tobacco use.

At a young age, Ellie’s parents were aware that they had a very social little girl on their hands. They also noticed she was easily agitated and over-reacted often. Her pediatrician labeled her as strong-willed and told her parents not to give in to her all the time. That was easier said than done. Ellie’s brothers loved their little sister unconditionally but she mostly acted in an unappreciative manner in response to their adoration. They were so much older then she was, so they were out of the house well before she became a teenager.

Ellie’s room was always a mess and her belongings were always disorganized. Her parents doted on her, being the youngest girl, and bought her all of the latest and greatest toys and gadgets. No matter how much she wanted to take care of her things, she just couldn’t remember to put them away in a safe place, where they couldn’t be stepped on or damaged. She would easily get bored with one toy and move on to another without putting away the first. She was often labeled lazy or rude when she didn’t respond the way her family thought she should, but she just wasn’t good at conversing in such a linear and focused way.

High school was both great and tough for Ellie at the same time. She liked the social aspect and excelled at calling friends together for parties and events at school. When planning activities she liked, she could literally talk for hours on end, filled with ideas that seemed to connect to one another.

Class was hit or miss. If she was interested in the topic that day she excelled in class. If the topic or subject didn’t interest her, she zoned out, daydreaming of traveling, or mulling over what some mean girl had said to her at lunch. In her seat in classes, teachers and even friends would comment about how she fidgeted, often tapping her knee without end.

She started experimenting with drugs her senior year and soon realized that she felt like she was “good at everything” when she was high on speed. Speed made everything fun and interesting. It could help her remain focused on just about anything for hours. She passed High School with decent grades, and half of her teachers loved her while the other half labeled her as lazy, working below her potential, and even a distraction to others at times.

Ellie went on to community college and worked as a waitress through most of her time as a student. She excelled at sports so she played on her school’s soccer team. As one of the team’s best players, she hated being taken out of games at any point. She blamed her frustration on her highly competitive attitude and always wanting to contribute to the team’s success. She noticed that when she exercised daily at practice, she could focus better in her college classes…especially the boring ones.

She did well in community college. She had a ton of friends from her soccer team and she loved going to parties. She loved her job as a waitress, as it was always fast paced and exciting, not to mention she was great at conversing with customers. When she moved on from community college to a four-year school, she quit playing sports. Classes became really difficult as she got further into her major. She did well at the ones that kept her interest, but the classes she didn’t understand or had too much math were hard, and her grades declined as a result. She was getting headaches from the stress and soon just didn’t want to get out of bed. She went to her Dr. who gave her painkillers to calm the symptoms of the headaches and that helped her finish her last year in college. She got her bachelors degree, got a “real” full time job, and moved out of her childhood house for the first time in her life.

After College, moving out on her own, Ellie started participating in some risky behaviors. At first, she just thought she was cutting loose, staying out all night, and experimenting more with drugs. Ellie would work hard all week at her new job and then party all weekend with her wild new group of friends. She got into some seriously unsafe situations and after nine months at her job, she grew bored of it. She couldn’t stay focused at work, was growing anxious, and only felt comfortable when she was being impulsive on the weekends.

She soon quit that job and quickly found another one. In between the transition to her new role, she was in a terrible car accident in which she was driving and had been up all night the night before. She had to go home with her parents to recover and her parents recognized that she needed to speak to a professional because she was acting too “out of control.”

After evaluation from a professional, Ellie was diagnosed after all these years with ADHD. The unusual thing was how her diagnosis came a little later in life than most are diagnosed. Ellie’s parents weren’t familiar with mental health complications and confused her behavior at a young age as a combination of immaturity, being a “social butterfly,” and a creative mind.

She sought and got the help she needed (various practices to help her focus and medications specific to her challenges with focusing and following simple directions). She now tries to help others going through the same issues. She still misplaces her keys a lot and forgets why she walked into a room a few seconds after and now she knows why she prefers to be impulsive. Her brain can only focus as intensely as she would like when she’s extremely excited about something, but she recognizes that and works on it when the topic isn’t as stimulating. She is more cognizant of what she chooses for work and sets time aside for her and her husband to go urban adventuring. She chose a career where she gets to talk to a lot of different people and to be creative.

She uses lists, and some special phone apps to help her keep track of time and stay organized. She rarely gets anxiety anymore and is a much better place with her negative thoughts these days after learning coping mechanisms. She does have to stay vigilant though as it’s easy for her to slip into her old thoughts and habits if she doesn’t take care of her mental health. She looks at it like exercise for her body. When she slacks off the bad habits start creeping back in. Her last line of defense is her favorite, helping others to realize they are not alone.

Here are some of the STARR practices that Ellie learned from her doctor who diagnosed her, and which she routinely uses to remain as healthy as possible: Integrative Breathing Practices, Yin (or Restorative) Yoga, Occupational Therapy, and Cognitive Behavioral Therapy. They can all be found through the link below.

Learn STARR Exercises that can help those of us with Attention Deficit Hyperactivity Disorder or “ADHD”: